In Sweden, over 70s comprise around 90% of Covid-19 deaths, with the majority having two or more comorbidities. 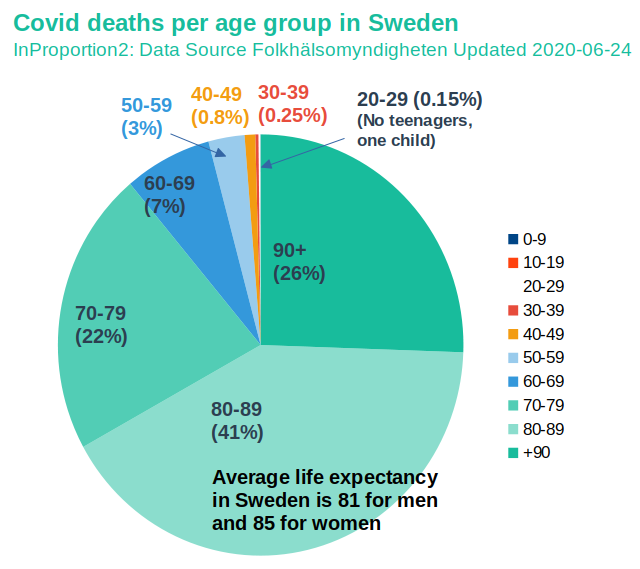 85% of Covid deaths linked to at least one comorbidity

Around 85% of people of all ages dying of Covid had at least one other comorbidity: 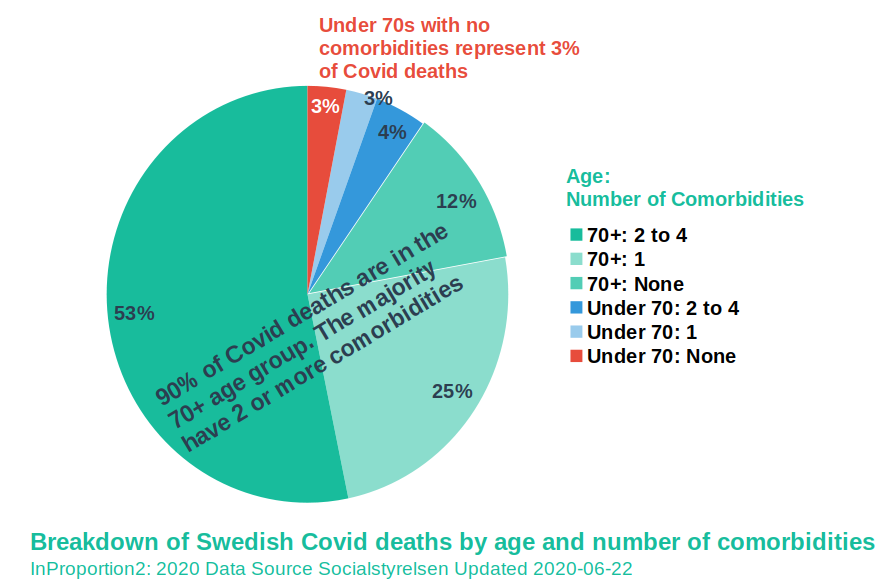 2019 saw lowest number of deaths for over 40 years

There are approximately 90,000 deaths each year in Sweden. 88,822 people died in 2019 – the lowest number of deaths in a single year since 1977, and 3.3% less than the average over 2016–2018. The Covid-19 outbreak in 2020 may have claimed a larger number of very frail and elderly people than it would have in a different year, due to the previous influenza season being less severe. Indeed, 2018-19 was reported to have been less intense than the five previous flu seasons in Sweden. [1]

Care homes account for half of all Covid fatalities

3,000 not unusual toll for a seasonal respiratory virus

It is important to remember that in Sweden as well internationally, viruses other than Covid-19 can be deadly or so serious as to require hospitalization, particularly in the elderly and those in risk groups, but in rare cases even in young people. For example, in the intense influenza season of 2017-18, despite vaccination, Sweden reported 1,021 flu deaths occurring within 30 days of a diagnosis, 93 percent of which were in the age group 65 years and older. During the same season, 447 patients were reported to be in intensive care with influenza. Of these, 15 required oxygen treatment, with 9 of these patients being under the age of 40. Of all intensive care patients, 74 percent belonged to at least one medical risk group or were 65 years of age or older [4].

During each of the influenza epidemics of the 1980s and 1990s, before the influenza vaccine was widely available in Sweden, approximately 3,000 people died, according to Swedish statistician Åke Nilsson. However, Nilsson points out that since then not only has the population grown, but also the number of seniors has increased significantly, with one of the most severely affected groups – the over 90s – having more than doubled in size [5]. 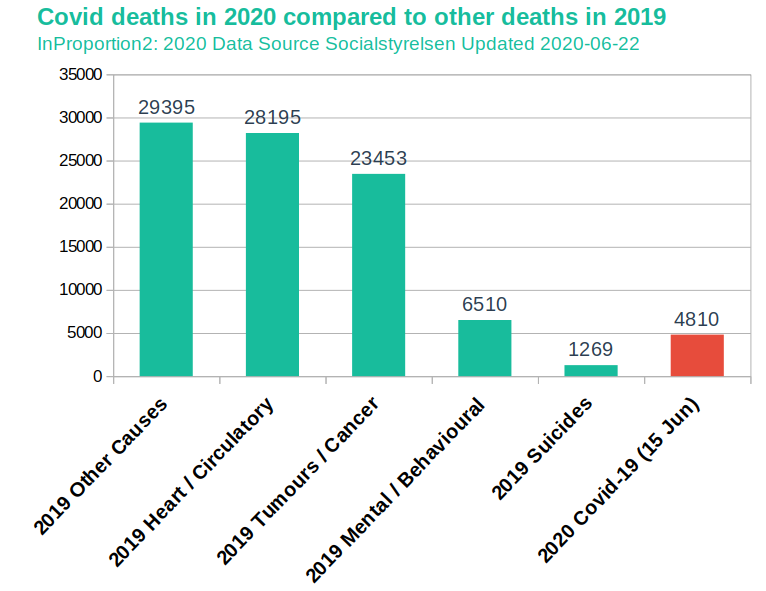 However, more risky by far than being infected with Covid-19 or taking a car journey is smoking. The Public Health Agency estimates that 12,000 people per year died in Sweden over 2010–2012 as a result of smoking, while around 100,000 per year suffer from smoking-related illnesses [7].

It is indeed important to maintain perspective on the impact of Covid on overall mortality in Sweden, and the risk it represents to the population. If Covid deaths were to amount to around 6,000 this year, and total deaths from all causes 94,000 (as calculated roughly by statistician Åke Nilsson last month), Covid would then account for 6% of all-cause deaths, versus around 30% for heart and circulatory diseases and 25% for cancer. [5]

Of the 4,810 who died of Covid-19 by mid-June, 90% were over 70 and 82% over 75. In addition, 85% had at least one comorbidity, and 74% were either in care homes or had home help. Only 1% of people dying of Covid in Sweden were under 50. Even in the modern era, it is not unusual for seasonal viruses to claim up to 3,000 lives in Sweden, and any Covid fatalities must be seen in the perspective of other causes of death, for instance cancer and heart disease, which claim a far greater number of lives. This year's final death toll in Sweden will be influenced by demographics and the low number of deaths seen in 2019, which saw a correspondingly mild influenza season.

In Sweden, as globally, Covid-19 has mainly seriously affected very ill, elderly people in care homes. The death toll thus far is significant, but in 2019 over five times more people died of heart conditions, still the number one cause of death in Sweden.

This data is based mainly on the number of deaths up to and including 15 June 2020 (4,810) from Sweden's National Board of Health and Welfare (Socialstyrelsen), which keeps thorough statistics based on cause-of-death certificates submitted by doctors within three weeks of the time of death (the illness or injury that set in motion the process that culminated in the death is classified as the underlying cause of death. Factors contributing to the death, 'comorbidities', may also be recorded).

These statistics differ slightly from those presented daily by the Swedish Public Health Agency (Folkhälsomyndigheten), which only reports deaths with laboratory-confirmed Covid-19 who have died within 30 days (50 percent of these are reported within 48 hours and about 90 percent within a week). Socialstyrelsen reports all cases where the underlying cause of death was Covid-19, regardless of whether the diagnosis was laboratory-confirmed or not. Of the total number of Covid deaths from Socialstyrelsen, 89 percent (4,261 of 4,810) had lab-confirmed Covid-19 according to Folkhälsomyndigheten's database, which indicates that these two registers show a good correlation [8].