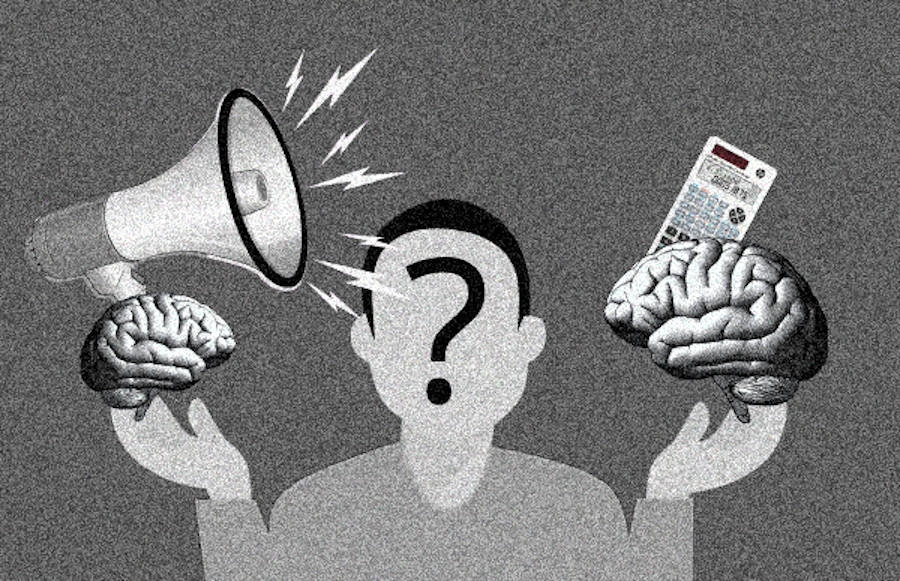 We have two sides to our brain. An instinctive side, that has evolved over millions of years, and a more analytical side, that is much newer.

Our instinctive side is understandably scared by COVID-19. However, it doesn’t have the ability to deal with a complex risk such as this pandemic. We need to make sure we use the newer parts of our brains to protect ourselves and our societies.

Thinking about the current COVID-19 pandemic and what policies we should ask governments to pursue is not a simple problem. It involves lots of big numbers and trade-offs over time. These are things that we are not instinctively good at.

My background is as an investment manager. Investment decisions have exactly the same problem. They involve lots of big numbers and trade-offs over time. Unsurprisingly, because getting investment decisions right can make or lose a lot of money, there has been much research done into how people make financial decisions. There is a whole field covering this – Behavioural Finance.

Looking at the current pandemic, I think we should use some of these ideas to help us make better decisions and, more importantly, avoid wrong decisions.

Please forgive me for making huge simplifications to keep this reasonably short.

One of the most important ideas is that our brains evolved over millions of years and numbers are new.

Admit it, your first thought was “a lot longer” not “1,000-2,000 times longer”. I will explain later. Trust me, we are just not naturally good with numbers.

What made us different was developing new parts of our brain that allowed us to process complex ideas.

For example, the part of your brain that keeps you breathing, even while asleep, is one of the really old parts. The part that let some clever paleontologist work out that the first mammals appeared around 200 million years ago is part of the newer bits. There are plenty of bits that evolved in between.

Daniel Kahneman won the 2002 Nobel prize for Economics for his work in this field and I think his explanation is one of the best ways to understand how our brains work. So, with many apologies to Dr Kahneman for a number of huge simplifications, I will use his framework.

His model is that our brain can be divided into system 1 and system 2. System 1 is old, very quick, but is quick because it guesses. System 2 is newer, slower, more analytical, but more accurate in complex problems. One of the reasons we often make bad decisions in complex cases is that system 1 has guessed the answer and we have committed ourselves, before the slower system 2 has come up with the right answer.

Let’s be clear, we should not criticise system 1. It kept us alive for millions of years. It just isn’t very good with complex stuff. Unfortunately, system 2 is also a bit lazy. As soon as system 1 has shouted out the answer from the back of the class, system 2 is quite happy to ignore the question unless prodded into action.

This is not about how much maths you studied at school, or how good you were at it. This is about how our brains have evolved, how they work and how they process information.

Let us look at some of the differences between system 1 and system 2. I have chosen three examples that I think are relevant to the current pandemic.

System 1 isn’t stupid, it’s just lazy. Once numbers get to a size where a few more or less don’t matter, it just switches off and doesn’t waste effort thinking about it.

Once numbers become large, we lose ability to differentiate between them. Our brains don’t get that the difference between one and two is not the same as the difference between one thousand and one million. That is because we understand one and two. While we completely understand that one million is bigger than one thousand, they are just two big numbers. One bigger than the other.

Again, system 1 isn’t stupid. It is just working to a different set of criteria. Five apples next year, compared to one apple now, might be a pretty good deal, but has no value if I don’t survive that long. Survival means having food NOW.

3) We are naturally risk averse

System 1 Reacting to an unknown threat is completely sensible from an evolutionary perspective.

System 1 can be very useful when faced by simple risks. However, it is useless at trading off one risk against another. All it does is jump away from the risk it sees. It doesn’t think about what other risks you might be increasing by jumping. Faced with more complex threats in the modern world, the slower answer that system 2 comes up with is often be better.

What if you were walking alongside a road with heavy traffic? That jump to the side could put you under a bus and be fatal.

So, what does any of that have to do with Covid-19?

We are not good with numbers. When thinking about this pandemic, we need to take a deep breath. Pause. Tell system 1 to shut up, and prod system 2 until it starts working and gives us some sensible answers. Let’s think about how those three traits, discussed above, might get us into trouble with this pandemic.

2) We aren’t very good at comparing something today with something in the future.

b). 2 people die every day for the next 5 years

3) We are naturally risk averse.

What do we need to we do?

As with any complex problem that needs us to trade off one risk against another, we need to pause, tell System 1 to shut up, and engage system 2.

System 2 is what will help us navigate this disease. System 1 will guess and get it wrong. System 2 is our best hope to get it right.

I am very worried that in the UK, and most other countries, System 1 is currently in charge.

Dr Glyn Jones – not a medical Doctor, but a PhD in mathematical modelling.

Then went for the money and had a successful career in the finance industry. Firstly, as a derivatives trader. Secondly, as an investment advisor and investment manager for pension schemes.

Believes that a major contribution to the success of his career was understanding the limitations of complex mathematical models used in the finance and trading industry.

One of his favourite sayings when discussing the results from financial models was, and still is, “Here are some numbers we made up earlier”.