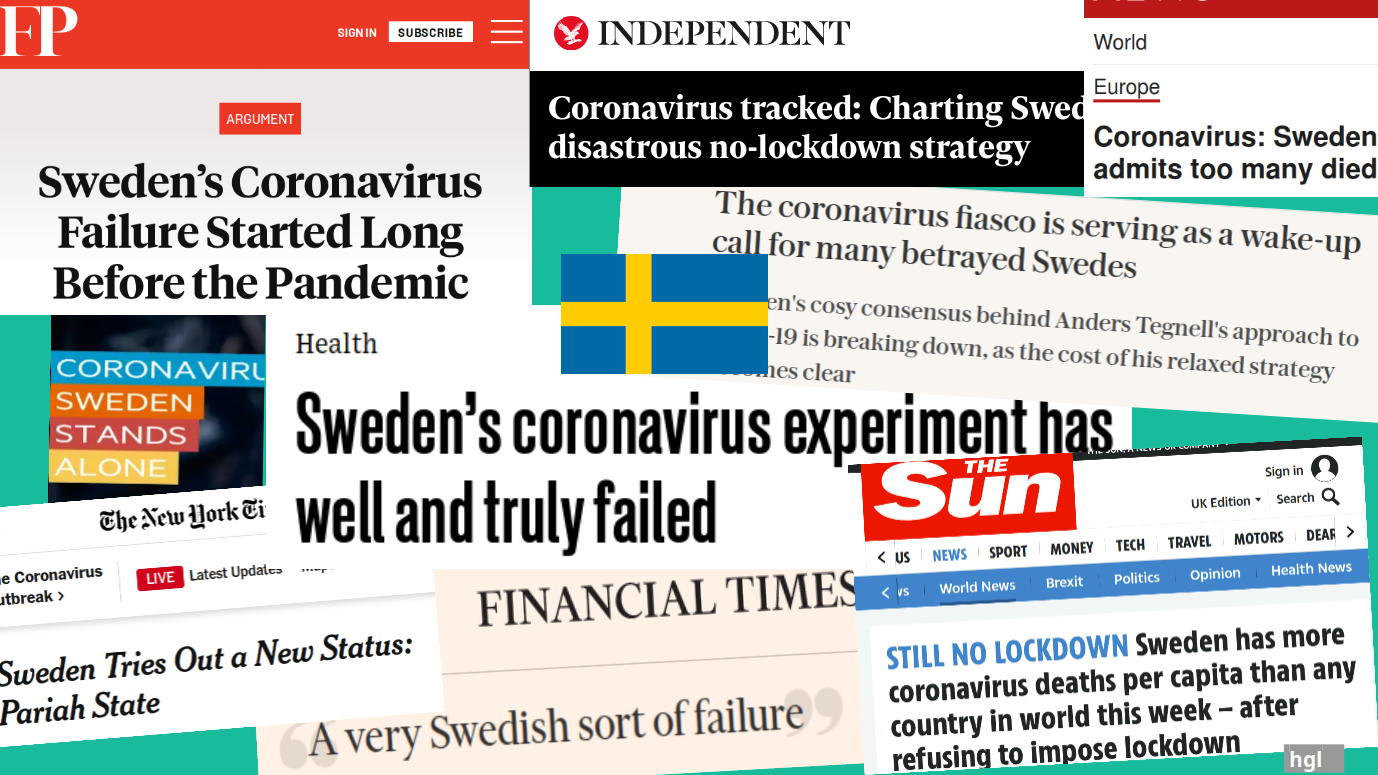 Lockdown has strained society to the limit

Lockdowns are immensely costly. The UK Government has already planned to spend around £132 billion in the current fiscal year, which is very close to the total annual budget of the National Health Service. [1]

This planned financial expenditure of course does not cover the unplanned spending and immense non-financial costs - for example, those that will be paid by the estimated 60,000 cancer patients who could die unnecessarily because of a lack of treatment or diagnosis, [2] just as one example of many categories of 'collateral damage' from the lockdown.

Sweden is a case study that many hate

Nearly every country has adopted a stricter form of lockdown than Sweden. If Sweden's approach should prove reasonably successful, it would indicate that other governments have made mistakes of historic proportion. Of course, governments will do everything to avoid appearing in error to such a degree, as will those in the media who urged them on.

The recent headlines shown here give a flavour of the hysterical antipathy often expressed towards Sweden. But is the negativity justified? Was the Swedish approach reasonably successful or not?

Comparing countries on the basis of Covid-19 deaths is flawed

The media has promoted the idea that Sweden has performed badly because of a high number of Covid deaths per million of population compared to its neighbours. One problem with this is that different countries may have different policies on what should be counted as a Covid death. As NHS Doctor Dr Malcolm Kendrick has recently stated:

"If a person who is 85 drops dead, what do you put on the certificate? I do this, so I know it is not very accurate. GPs were advised to put Covid-19 on the certificate if they suspected somebody had it, even if there was no test done" 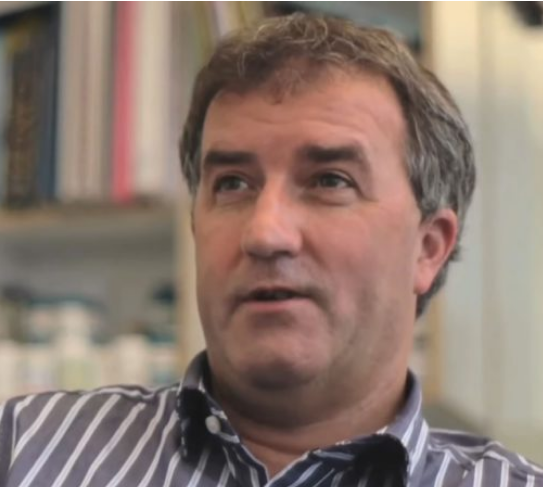 During March, April and May in England and Wales, there were around 15,000 deaths that would not normally happen at this time of year and that were not diagnosed as Covid deaths.[11] Opinions differ on what proportion of these were undiagnosed covid deaths and how many were 'collateral' deaths - unforeseen consequences of lockdown measures. Whatever the case, it must be wrong to ignore these deaths when making comparisons between countries.

In the US 'probable cases' have been included in test-positive numbers. This refers to individuals 'anecdotally matching the symptoms of COVID-19 but lacking an actual test' - this means that if you live in a certain location and have a cough, you may be counted as a Covid case.[4]

Can we be certain that the testing approaches adopted in differing countries are really comparable - if tests are even performed? When a country records a Covid death does it make the same distinctions as another when deciding whether a person died with Covid or of Covid?

Are the tests reliable and counted consistently?

The Norwegian Health Authority advises the public that as many as 14 out of 15 tests for Covid may be false positives. If that sounds unbelievable, check the reference below for yourself. [5]

In the UK the government recently needed to reduce the test-positive count [7] by 30,000 due to double counting, while in Ireland authorities have announced that Covid deaths have been overstated by around 55%. [8]

"Though the whole world relies on RT-PCR to 'diagnose' Sars-Cov-2 infection, the science is clear: they are not fit for purpose"

Many authorities recommend the use of 'excess deaths' as a basis for comparing countries, but this approach has its problems; see discussion in notes below. [9]

Importantly, the use of excess deaths as a measure contributed to the panic around Covid when April 2020 was compared to previous Aprils, and found to be 'off-the-scale' bad. Had more emphasis been placed on comparing Covid with normal flu seasons (which are finished by April), Covid might have been better understood as something comparable to a bad flu outbreak - and responses to it might have been more proportionate.

Sweden might appear to have a higher figure for Covid deaths per million because it failed to lockdown OR because it has a different approach to testing, diagnosis and reporting OR because the test itself is flawed OR for some other unforeseen reason.

If instead of Covid deaths per million, we instead base comparisons on overall 'all-cause' mortality, these concerns go away. After all, one death is one death in any country, regardless of policy, practice or test efficacy - and is simple to count.

Conclusion 1: Looking at simple 'all-cause' mortality is a better basis for country comparisons as differences in testing, diagnosis and reporting will not impair or invalidate comparisons.

In the following comparisons, Scotland - Norway and Denmark's neighbour - has been included as an honorary Nordic country. Like Sweden, it has suffered badly from Covid, and as seen in the following table is in many respects comparable to the traditional 'Nordic' countries:

First of all, we can look at the overall deaths per week. Covid can be seen to have a clear impact on overall mortality for Sweden and Scotland. For the other countries it is hardly visible. Notice how, until Covid deaths start to have impact, Sweden has lower deaths per million than most of its neighbours. Scotland suffered high mortality at the start of the year as well as during the Covid outbreak. 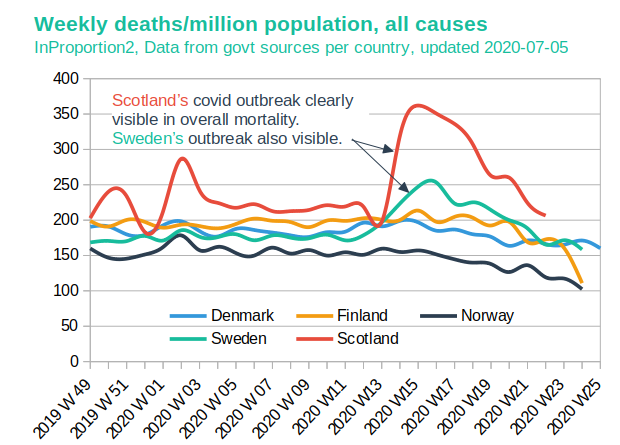 A cumulative total shows that both Scotland and Finland have suffered higher overall mortality than Sweden. 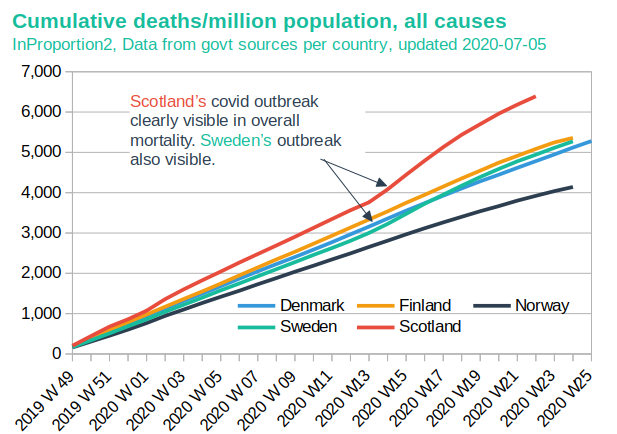 Zoom in on cumulative deaths

If we zoom in on the above graph, we can see how Sweden starts the year with lower mortality than Denmark. Then, as Covid shows an impact, Sweden's mortality rises above that of Denmark, but remains lower than that of Finland and Scotland. 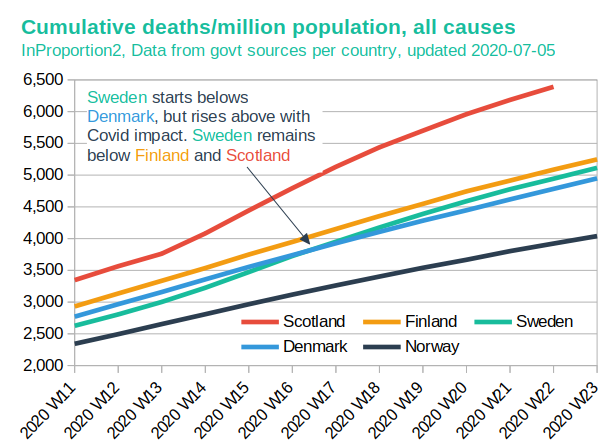 Conclusion 2: In terms of all-cause mortality, Sweden is seeing a better outcome for 2019/2020 than Finland and Scotland, and is very close to Denmark.

Does lockdown severity correlate with overall mortality? Do other factors?

Going to work or not

Using Google's published mobility data, we can get an impression of how severe the lockdown was in each country. Plotting this against deaths per million, we can see that people in Scotland avoided work the most, and that Scotland saw the worst overall mortality. People in Sweden attended their workplaces more than residents of the other countries. 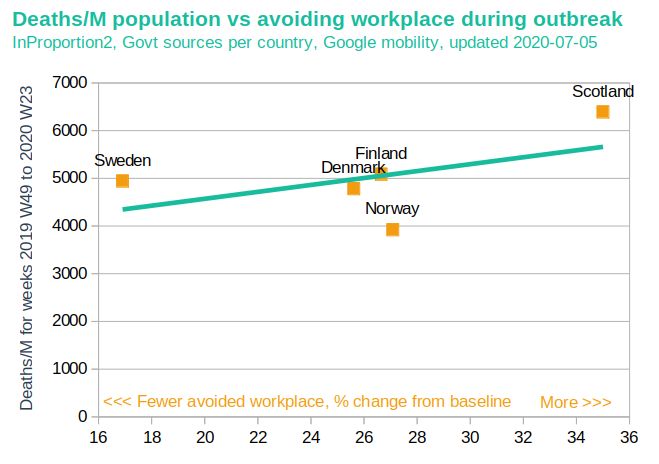 Here we can see that people in Scotland stayed at home the most, and had the worst overall mortality. Swedes stayed at home less than the Finnish, and had a better outcome. 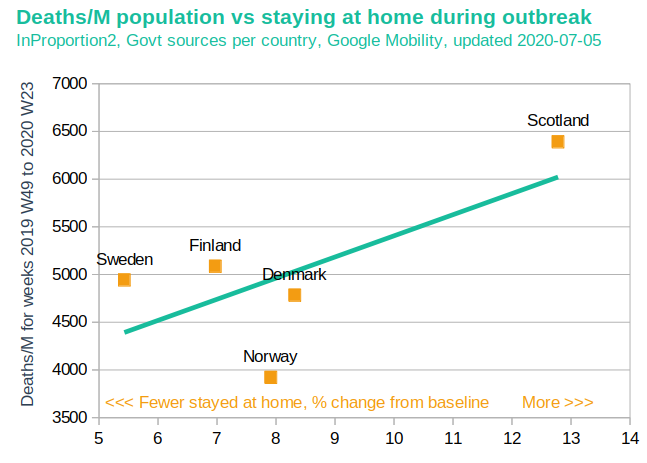 Living in the city

Population densities can be misleading. Sweden for example has a relatively low figure for population density due to its huge land area, despite the fact that many people live in densely populated cities. As an alternative, this chart shows the proportion of people living in the country's two largest cities.

No clear correlation is apparent here. 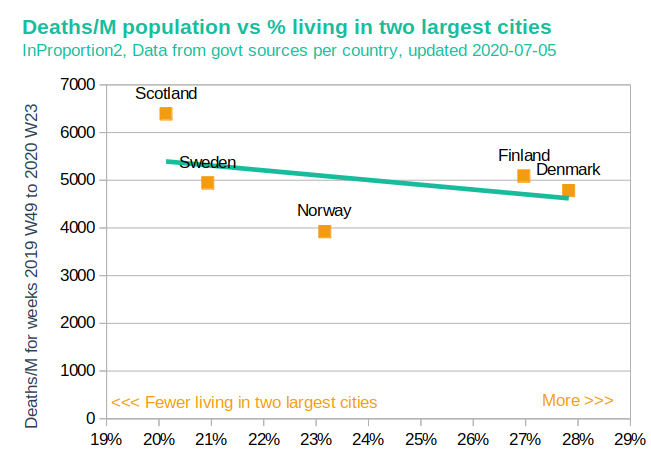 Here we look at the proportion of the population aged over 64. Unsurprisingly, there is a clear correlation between age and overall mortality. If we exclude Scotland from the chart, the line through the other countries would be a reasonably straight one. 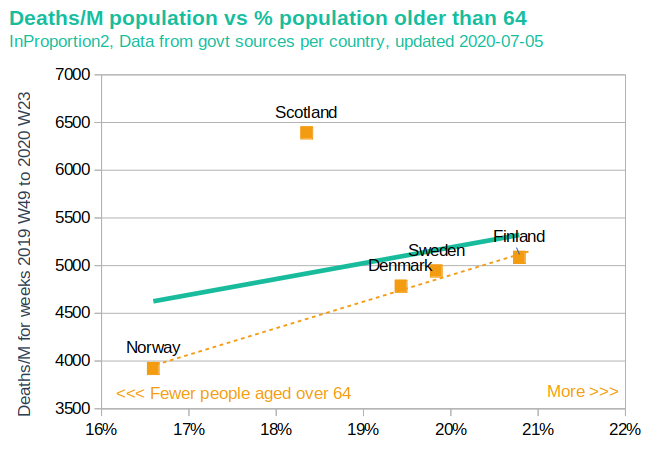 Conclusion 3: Severity of lockdown does not seem linked to a good outcome in 'all-cause' mortality in 2019/2020.

Sweden had the least severe lockdown, and has had a better outcome than Finland and Scotland.

Scotland had the strictest lockdown, and did the worst of all compared with its neighbours.

The Öresund region is a bi-national metropolitan area that spans Denmark and Sweden, sometimes called 'Greater Copenhagen'. As such, it provides a relatively homogenous population spanning two different lockdown policy zones. If lockdowns were indeed effective, this would be the perfect place for that to be revealed in the data.

The data reveals that the lockdown on the Swedish side of the region did not provide an overall reduction in Covid deaths per million of population. 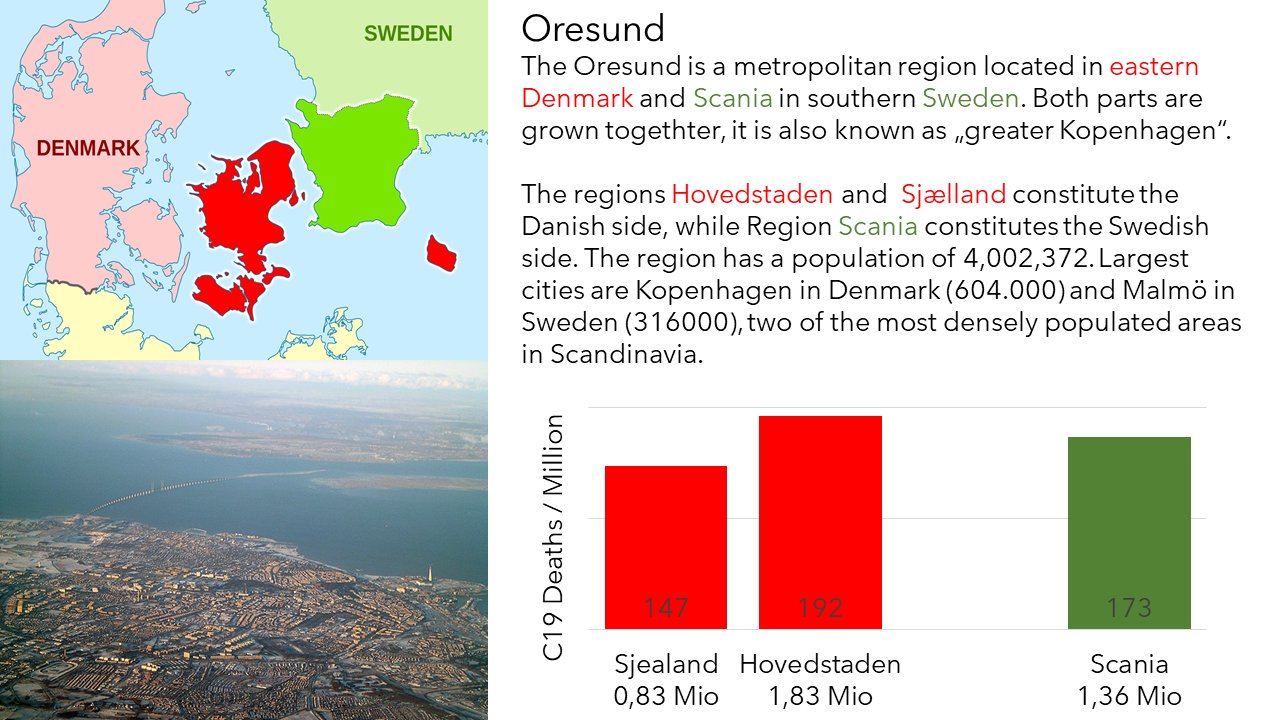 Overall conclusions: Overall mortality in Sweden is better than that of Finland and Scotland, and very close to that of Denmark.

Comparisons of Covid deaths per million in the Nordic countries made in the media are unreliable.

The hostility and negativity of the media towards Sweden's approach to Covid is unjustified, harmful and deeply irresponsible. 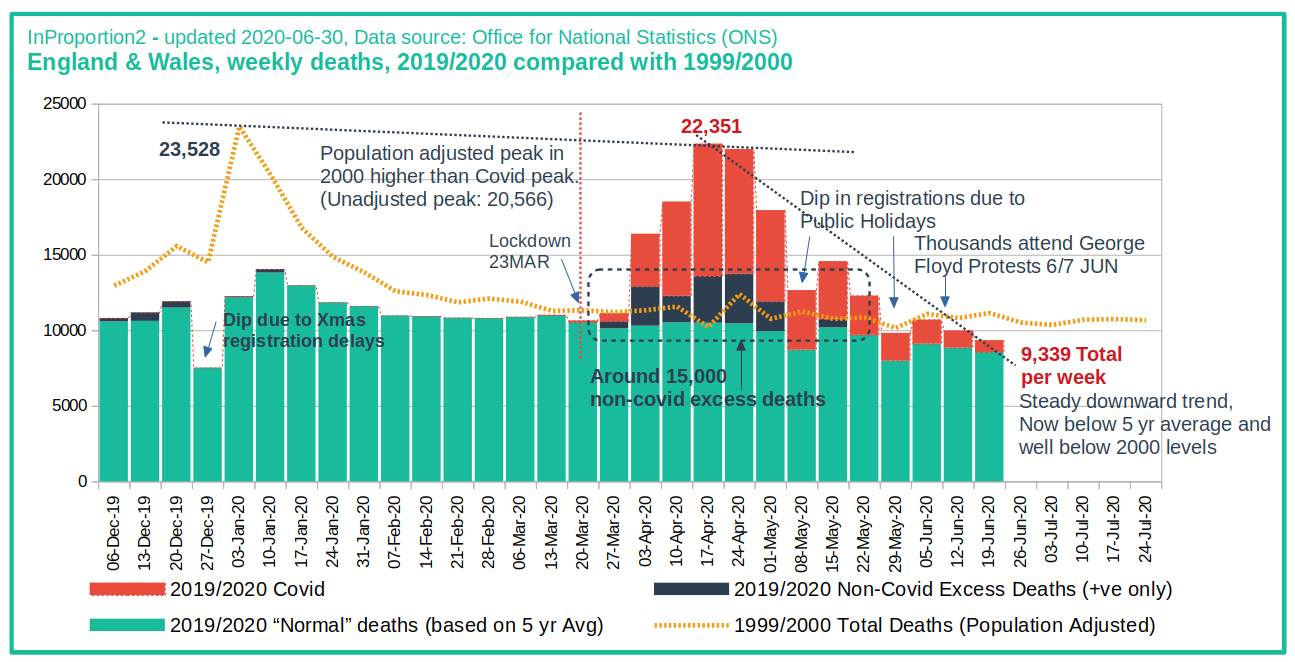