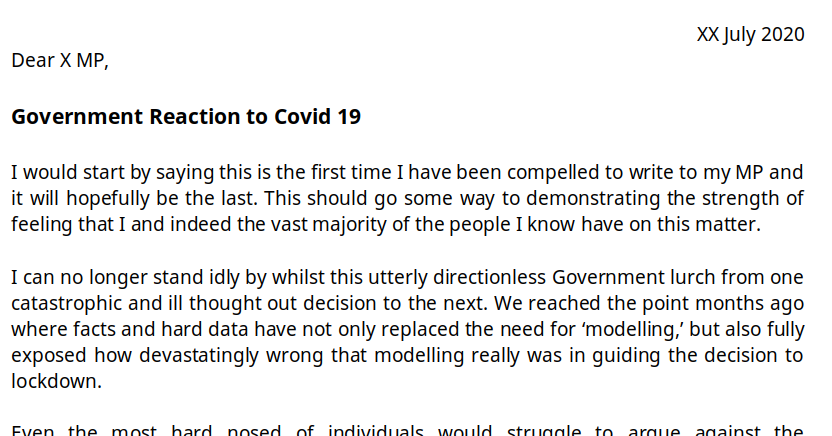 Make sure you give it a shot. Twitter user OO51HAR has provided a great template. Edit it and make it your own and send it to your Member of Parliament or other political representative. Do it now!

For the UK, enter your post code into this this Government web site members.parliament.uk/FindYourMP and you can find the address and email of your M.P.

The text of OO51HAR's letter follows:

I would start by saying this is the first time I have been compelled to write to my MP and it will hopefully be the last. This should go some way to demonstrating the strength of feeling that I and indeed the vast majority of the people I know have on this matter.

I can no longer stand idly by whilst this utterly directionless Government lurch from one catastrophic and ill thought out decision to the next. We reached the point months ago where facts and hard data have not only replaced the need for ‘modelling,’ but also fully exposed how devastatingly wrong that modelling really was in guiding the decision to lockdown.

Even the most hard nosed of individuals would struggle to argue against the implementation of the initial lockdown despite the fact that it is now proven to have been ineffective in changing the trajectory of the virus. Indeed, even Chris Whitty the Government’s Chief Medical Officer has last Tuesday admitted the lockdown was not necessary.

The most damaging piece however is the fact that the Government did no cost benefit analysis of locking down the country and taking away our civil liberties. No thought whatsoever. It was quite simply a knee-jerk and hysterical reaction, NOT guided by the science as the published SAGE committee minutes have now proven. This sort of ad hoc and utterly reactive decision making has sadly become the trademark of the inept Ministers we have in Government.

The facts are that the lockdown will cause huge additional loss of life from cancellation or postponement of elective surgeries, non-urgent treatments and the general public not reporting early stage illnesses to their GP. There are many studies into this, showing hundreds of thousands of excess deaths will be caused. However, perhaps the best source is the paper by Department of Health and Social Care, ONS and Government Actuary’s Department of Home Office published 8th April 2020 which shows more than 200,000 people dying as a result of lockdown. This paper went largely unnoticed until it was mentioned by Sir Patrick Vallance recently whilst testifying before the House of Commons Science and Technology Committee. Not that we needed any more evidence of the obvious huge damaging effects of lockdown, this proves the Government knew full well the consequences very early on in this process yet continued and indeed still continue with their policy.

Steve Baker MP recently stated that “our imaginations were unequal to the task of foreseeing the consequences of closing down a large proportion of our economy and society…” Really! Simon Dolan has literally been taking the Government to Court on exactly this since April and is still as I write pursuing a Judicial Review. Anyone who offers up the pretence of feigned shock either lacks the mental capacity to hold a position or is simply lying.

There are of course two parts to this lockdown, the second and no less serious is the devastating impact on the UK economy. We have witnessed thousands of businesses going bust, likely millions unemployed by the end of the year and a recession many multiples worse than any on record. And for what? The likely death toll from this virus will end up being no worse than a bad flu year. It has already been clear to anyone with any inclination to research for themselves that the published figures were encouraged to be wildly over exaggerated as the Government have increasingly sought to justify their actions. Indeed last week Public Health England have admitted that it has massively overstated the death rate by its plainly ridiculous methods of recording deaths for anyone who at some point in the past had tested positive for Covid, even if they were ultimately run over by a bus.

Rather than argue ad infinitum about the deaths ‘from’ or ‘with’ Covid the undeniable way to settle this is to consider overall mortality in the UK. The fact is we have never breached the mortality rate for the year 1999/2000 and for many weeks now we have been well below the 5 year average. As a result it is highly likely we will end the year at or around the overall mortality rate we had in 2017 (a bad flu year). There is therefore no justification at all to support any form of Government intervention. None whatsoever. Let alone the heinous and wilful destruction of life, economy and civil liberties that we have and continue to witness on a daily basis.

You could be forgiven for thinking this is a view held by the few. You would be wrong in that assumption. I run a number of businesses and speak on a daily basis with professional people all around the UK. I cannot think of any one of them who does not hold a similar view to that outlined above and moreover they feel very strongly indeed about the Government’s mishandling of this situation.

History will not look kindly on the Government’s actions in this crisis and will look even less favourably on those in Government, who with the full facts at their disposal, decided to sit idly by and allow this farce to continue. In the face of the wall of evidence, data and analysis and a virus that is all but disappearing, what does the Government decide to do? Do they hold their hands up as Norway have done and admit their fallibility and learn from their mistakes? No! They double down on ‘Project Fear’ and for no provable scientific reason at all they arbitrarily implement the use of face masks in shops, supermarkets, cafes, etc. This is the straw that breaks the camel’s back.

The simple and undeniable fact is the Government have hysterically overreacted to a virus which is now proven to be way more benign than first imagined and much more closely related to a normal corona virus, the likes of which we have dealt with for a hundred years. Their unplanned knee-jerk reaction has had such a catastrophic and devastating effect on people’s lives and the economy that they now seemingly have no other option other than to proliferate the lie. No cost is seemingly too high to avoid admitting that they got this wrong as proven by their continued willingness to destroy lives, prospects, civil liberties and wreak irrevocable damage to the social fabric of our society.

What we can be certain of is that the facts are publicly available to all who care to look and no matter how hard the Government try to extend this there will come a time when the truth will out. Thus far the vast majority of the elected 650 MP’s have done absolutely nothing to question the Government’s actions and as such must be seen as complicit. I respectfully ask that you listen to the views outlined above and trust that they are not just my beliefs and opinions but also those of many, many more. Unfortunately the task must fall to elected MP’s to do what the MSM have failed to do and take the Government to task on their direction and decisions. Given the stakes surely there can be no more important a job.

I would welcome the opportunity to discuss these points further if you felt it would be of assistance.