As Covid-19 disappears off the radar for most of the UK, a reversal into stricter lockdown measures is being imposed on Leicester, in the North of England. Why? 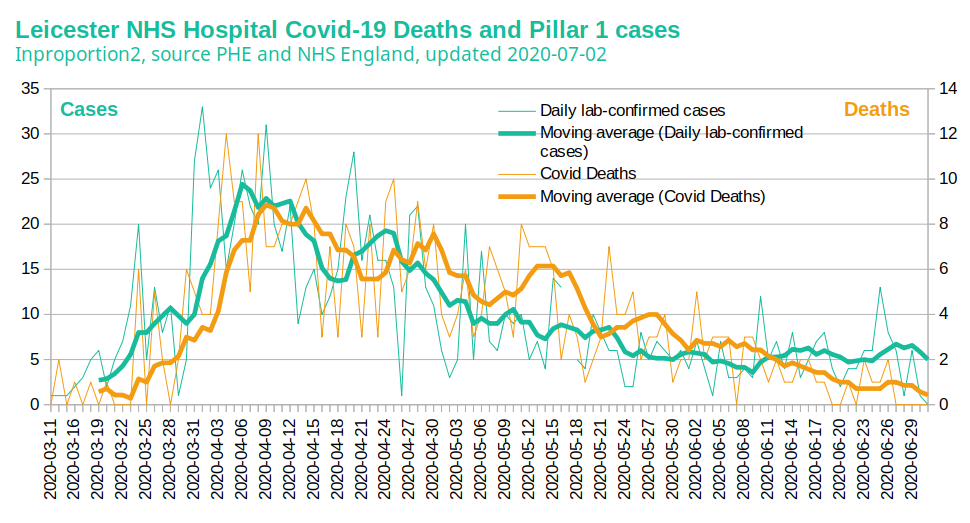 Lab confirmed Covid cases for Leicester were yesterday 0. the day before 1, Monday 6, on Sunday 1. These are low numbers and probably around 40% will have no symptoms, for those who do get it, the risk is similar to flu (which is of course significant for older people or those with comorbidities, and little to worry about for the rest).

The test numbers described above are the so called "pillar one" (hospital lab) tests. The UK government is not organised enough to publish the "pillar twos" - swabs done in car parks, or by mail etc. So the panic in Leicester is based on Secretary of State Matt Hancock's verbal statement that there were 944 cases between 13 June and 26 June. Unfortunately this information is provided without any indication of how many tests were conducted, most probably because the government simply does not know. There was no up-tick in the Pillar One tests* which are published.

Trends in test results are close to meaningless if you do not have the number of tests conducted. This makes Matt Hancock's 944 cases a most unreliable indicator - as the more tests you run, the more cases you will find.

If a telephone poll found that 274 people tested positive as Boris Johnson supporters it would be meaningless if you are not told how many people were telephoned. If 1000 people were called that would mean one thing. If the sample size was 10,000 (more likely) it would mean something completely different.

We do not know the sample size for the "Pillar Two" cases.

Pillar one tests have been performed at a roughly consistent rate in quality settings (hospital laboratories) and therefore do provide a good indicator. The trend in pillar one cases indicates there is little to worry about (green line in the chart above). To reinforce that impression is the trend in Leicester's Covid deaths, which have declined closely in step with infections (orange) and are now at very low levels (no deaths since 26 June and total of 5 over the seven preceding days

Conclusion: The UK government has proven itself prone to panicking and overreacting and is doing it again. The scientific/medical establishment seems asleep at the wheel in not calling them out on this. Too few are concerned about the consequences of lockdowns.