Many of us are wondering, "how the heck did we get here?"

Our response to a virus that is similar in lethality to previous flu epidemics resembles an attempted economic suicide. From UK politicians we hear a droning mantra of "follow the science" but to anyone paying attention, their science is unsound

One part of this story is "scientific rot" - like a fungus that decays your floorboards until the house falls down. This was identified in the Lancet in 2015. They didn't use the term "rot", but it fits.

According to the Lancet:

"The case against science is straightforward: much of the scientific literature, perhaps half, may simply be untrue. Afflicted by studies with small sample sizes, tiny effects, invalid exploratory analyses, and flagrant conflicts of interest, together with an obsession for pursuing fashionable trends of dubious importance, science has taken a turn towards darkness. As one participant put it, “poor methods get results".[1]

Let's consider some of the points made by the Lancet in context of the UK Government's response to Covid:

Half the literature may be untrue: It does seem that the government has cherry-picked science to suit the positions it has taken and ignored the rest. Why did the UK government ...

Small sample sizes: the Imperial College studies that triggered lockdown had no sample sizes at all, they were just hypothetical models, played out in some highly criticised and geriatric computer code.[3]

Tiny effects: Many people assume lockdown had significant effect. But the trajectory of Covid, whether it is deaths or cases, has followed similar patterns around the world, regardless of if or when interventions such as social distancing have been made; any beneficial effect of lockdown is so small that it is invisible in the data. Note this chart comparing daily deaths in Sweden, compared to the UK. If lockdown was effective, it would show in the data.[4] 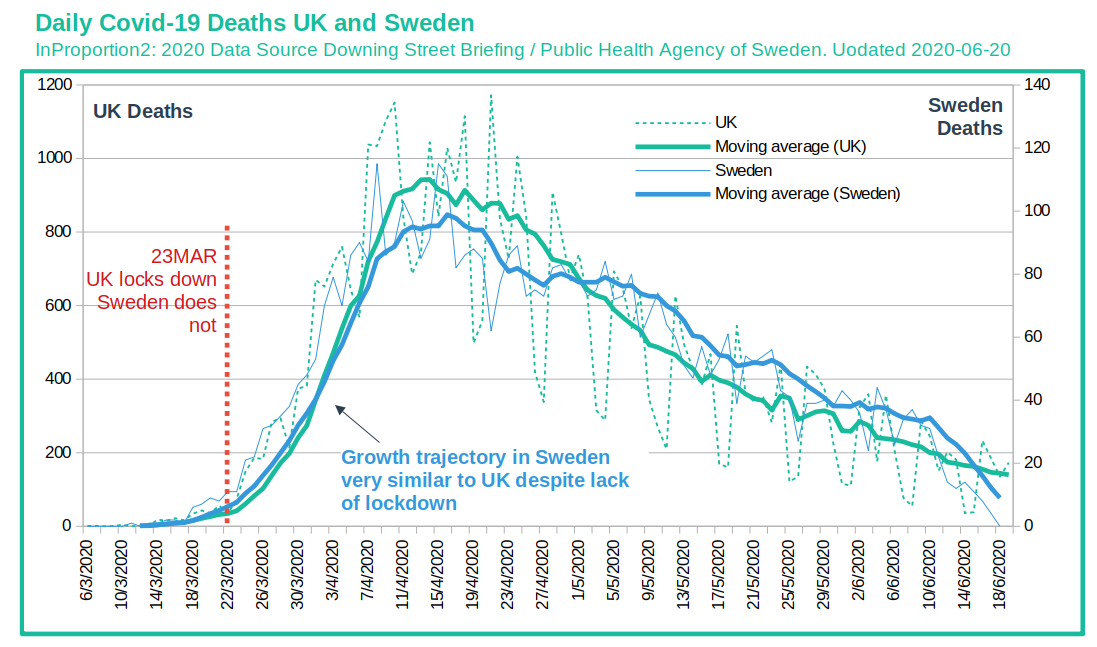 Invalid exploratory analyses: Did Imperial do any exploratory analyses? No. they rather glibly plugged in some very controversial numbers to their highly volatile model, and then the Government jumped straight to the implementation phase of some of the most draconian public health interventions in history. Common sense should have prevailed against this.

The cold war is over. Attacks by the West on the Middle East are getting harder to justify and presumably "blaming Russia" has not resulted in enough arms sales. Arguably in the twenty first century a gap has been filled: big pharma has combined with the military industrial complex famously identified by President Eisenhower in 1961 to form a fearful conjunction of power and money that threatens democracy [5]

The "Fear the Corona virus" narrative - even if it was justified - could certainly be harnessed to generate corporate profits. Fear is a natural driver of demand for vaccines or drugs such as Gilead's Remdesivir.

Common sense will tell you that when large sums of funding in grants and patronage are in play, the potential for the twisting of scientific research and public health policy to suit corporate interests is enormous.

It would be easy to start looking for "big pharma" related conflicts of interest in connection with Covid as others have done. The links between governments, academia, and non-profits are legion and involve huge sums of money. [6]

Glaxo Smith Kline is guilty of numerous past misdemeanours where the penalties are measured in the millions or billions of dollars. Is there any other industry where such huge penalties are paid and yet the perpetrators continue to be highly profitable?

Of course large corporations do not have to be corrupt for the the coronavirus crisis to be a business opportunity as much as it is deadly:

Unsurprisingly, according to the Financial Times, Big Pharma hoping for "billions" in coronavirus funding

Organisations are run by individuals

Individuals who run these large organisations may also be at risk of having conflicts of interest:

The media may dismiss suggestions of widespread conflicts of interest such as are suggested above but let's not forget that Big Pharma buys billions of dollars of advertising each year.

Science is suffering in the information age. Previously a slower more plodding approach existed where research was peer reviewed over a decent period of time. Good science was gradually distinguished from bad before it was widely disseminated. Now in the internet age, anyone can write a paper and distribute it around the world in seconds, no peer review required. In all this haste, the temptation to get attention or promote financial interests is just too much.

The sheer quantity of science available makes it possible to cherry pick the research that suits prejudices and/or agendas - we should all of course know better than to do that.

In 2015 The Lancet warned that "science has taken a turn towards darkness". Nobody much listened then and we are now paying the price. This dark and rotten science that is owned by corporations and steered by the power-hungry, alongside face masks and fearful populations, must not be allowed to be part of a "new normal" - we must fight back.

Science is suffering from a rot which has helped fuel a global panic about Covid. The ensuing chain of events now threatens public health, the economy and civil liberties. Our way of life is now in jeopardy. [8]

Photo by Maria Teneva on Unsplash