In the last release of mortality statistics from the ONS (data to 2014-04-03) showed a sudden increase in deaths. Unsurprisingly, many of the excess deaths are attributed to COVID-19, about 3,000. What was very surprising is that,compared to the five year average, 2,500 additional non-Covid deaths occurred in a single week. 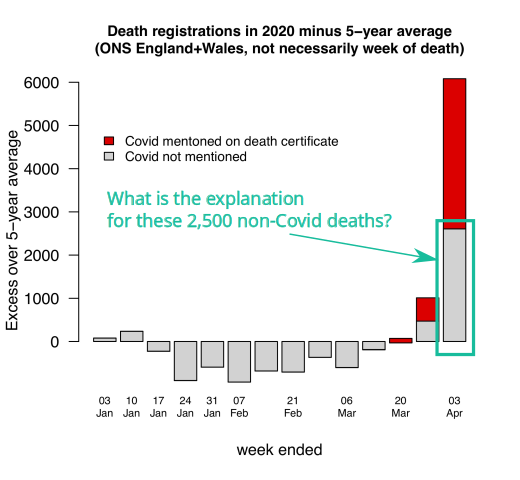 The big question is, what are the cause of these additional 2,500 deaths. Could it be a failure of the registering doctor to correctly identify COVID-19 as a cause of death on the death certificate - or - are these extra deaths collateral damage happening as a unintended consequence of the lockdown?

For the time being at least, the data is not available for us to understand the breakdown of these recent excess deaths, and its likely is that the explanation includes a combination of failure to diagnose and collateral damage.

Here are some possible explanations of what is happening from people with relevant expertise.

In the long run, the lockdown is likely to be killing more people than it is saving

Heard somewhere on the Internet:

One guy I know works in a lab analysing samples for determinations of cancer or other disease problems. Their workload has gone down 85% because of the virtual shutdown of primary care. What happens to those who would otherwise have diagnoses of clinical conditions needing prompt treatment to maximise the chances of a good recovery? Are we now going to get a silent epidemic of deaths of people with a wide variety of other conditions whose diagnoses came too late?